We stood for a few minutes, admiring the view of the bluffs and the Cowley County Fishing Lake on a gorgeous autumn afternoon. While Randa snapped a couple more pictures, I noticed a faint footpath leading back to the west. Within a couple of minutes, I’d disappeared into the bushes and branches woven around the trail. After walking a hundred feet or so, I paused at the edge of the bluff and looked back toward the lake. My eyes followed the line of the flat stone across to the hill on the opposite side and then back toward the west. The line stopped abruptly toward my right.

It took me several seconds to figure out what seemed to be an illusion. The ground seemed to fall away to the west of that rock line. Seams of gray were interrupted by a wide band of a coppery color with a small pool of water lying to the side. Suddenly I realized that I was looking at the waterfall. Well, at least at what would be a waterfall if there was any water to fall.

Instead of the narrow, slight outcropping I’d expected to find in a little creek, this lip spanned sixty or seventy feet across, with a drop of thirty feet or more. The coppery color was the deep soil that layered beneath the seams of limestone. Large boulders at various angles littered along the edge down from the bluff to the bottom.

Using tree roots for handholds, Randa and I climbed down, with Layla trailing us on her leash. Sycamores and cottonwoods grew along the rock-strewn bed below the falls. That small pool at the base of the falls and a glistening seep along the southern bank were the only indications of water. There were signs in the sweep of old stems and leaves caught against trunks a couple of feet above the ground indicated there had been times of flow, though.

We probed around the scattering of stones and boulders and walked along the creek bed after it passed out of the bluffs just a hundred feet or so downstream. Dozens of different colors and half that many textures spanned the stretch of rocks and stones. We felt smooth edges and saw sharp breaks, suggesting the differences in spans of exposure to water and wind and time. The trees growing closer to the base of the falls were much younger than those growing downstream.

Along the northern bank, the thick base of an old cottonwood testified of decades of determination and endurance. In its roots, rocks the size of couch cushions were held at odd angles. Several feet above the thick base, the trunk had been broken and rotted, giving way to nothing but a jangling of strong branches holding a few quaking leaves in the gentle breeze. Yet the old tree still held to deeper soil, a mass of rocks and roots reaching down a few feet and then disappearing into the nourishing earth.

Given a deep enough grip and a solid enough determination, we can endure the storms and floods. Faith and hope can hold through the darkest nights and strongest winds. Eventually, though the stones may affect the shape, they cannot keep the roots from their seeking. Faith that overcomes mountains can certainly make its way around a few rocks. 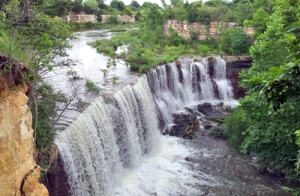 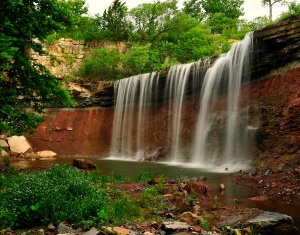