I had a scheduling conflict last Saturday; there were two different obstacle challenge races and I wanted to do both of them. One of them was hosted by the school for which Randa and I both work, Highland Community College. The Scottie Dog Dash, named after the school mascot, was held on the land donated to the College a few years ago, the Klinefelter Farm near Hiawatha. The other race, one of the Warrior Dash series, was slated to be held at Circle S Ranch, near Lawrence, Kansas.

Being sixty years old and not dedicated to the level of training required to be truly competitive, I accepted at the outset that there was no way I was going to do two 5K cross country obstacle races in one day and truly compete in both of them. In fact, I accepted that I was not going to be competitive in either one of them. It was not my goal to be a top finisher in either event; I would celebrate doing two races in one day. Provided, of course, that I would actually be able to finish both races…

The first wave of the Scottie Dog Dash was supposed to be for the fastest runners and everyone who’s ever seen my run knows I’m not one of those. Nonetheless, I easily persuaded our Director of Student Activities, Tyler Nordstrom, to let me run in the first wave so I would have the maximum amount of time between races. I did that three-point-two miles of northeastern Kansas hills, woods and cropland in about forty-three minutes. Unlike several of the younger runners in front of me, I also completed every obstacle challenge, including flipping the big tractor tire, crawling through the mud and running across the creek four or five times. I wanted to hang around and celebrate with the other runners but instead, I had to get back to the house, clean up a bit and then head toward Lawrence.

The hills at Circle S Ranch were bigger and steeper and there were more of them. The obstacle challenges were also bigger and steeper and there were more of them, too. In addition to running into and wading through a few muddy water crossings, we had to swim out to and climb over three successive floating pontoon crossings in a pond, then swim our way to the opposite shore. There was also the three-stage climb to the top of “Goliath” and then the slide down a forty-foot half-pipe into water. “Feet first and lean forward,” was the instruction we were given at the top. I must have been going twenty-miles-an-hour when I hit the water! The impact slammed my upper body backwards like I’d been hit by a lineman. Yes, by the way, it was quite fun!

It was sure a different kind of fun a half mile from the end of the course, when both calf muscles began cramping. My right knee had been hurting somewhat ever since the first mile. I’d scratched my left leg on a thorn bush. I jogged across a small stream and headed up the last hill, slowing to a fast walk. “Well,” I told myself, “if I was going to quit when it started to hurt, I wouldn’t have come down here.”

As soon as I walked out of the trees and looked downhill toward the huge mud pit finish line, I saw Randa watching for me. I waved and she waved back and I started to trot down the hill. I paused and posed for my last semi-clean picture and headed to the slurry mix.

Halfway through, ducking beneath the strands of barbed wire, I slipped and fell on my left side. I was immediately covered with the thickest, stickiest mud I’ve ever been in or even seen. When I made my way out of the pit, I carefully slid and slipped across the treacherous last thirty yards. One of the workers hung a medal around my neck and I lifted both muck-plastered arms and shook my hands above me in celebration. 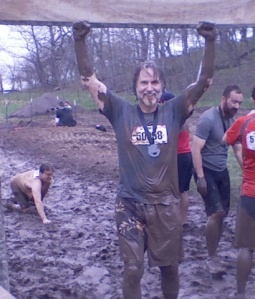 Whether crawling or standing, it’s about finishing the race!

I was tired, aching, sore and spent, but I had finished the race, I had stayed the course and the look on Randa’s face was worth every step. She was smiling almost as broadly as I was.

Most of the things we do in life probably make more sense to other people than does this hobby of mine. But I have an absolute blast doing it and its lessons are so valuable: train well, endure the pain, go the distance, help others along the way, expect to fall but decide before hand you’ll always get back up. Keep focused on the prize and the eyes of those who’ve gone before us and never ever forget the joy that awaits us when our race is over.